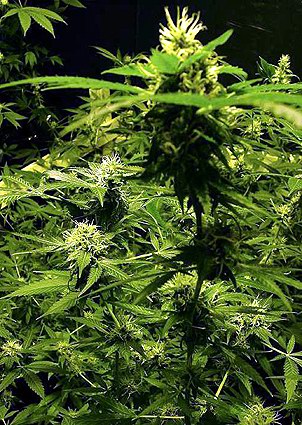 In the US, it seems that the word ‘Kush’ is about as meaningful as ‘Skunk’ is in the UK.

That is, the two terms are applied to most indoor hemp that’s sold for profit, and both names are used to suggest that the hemp being sold is highly potent, rather than to indicate any particular genetic heritage. Before being adopted as the strain-name buzzwords of the moment, both “Skunk” and “Kush” were fairly strictly defined strains, with clear breeding or geographical origins.

More worryingly, when the buzzwords of the youth or underground cultures seep into the mainstream, they get picked up by the hysterical MSM and turned into the latest scare story.

No doubt, all of the forum’s British members will be aware of the garbage that’s written and broadcast about “Skunk” in Blightly – as if it’s some new, child-incinerating super-weed that just dropped out of the sky, rather than a fairly common, medium-to-high potency strain that’s been around for at least 30 years.

What’s especially nauseating about this claim what it tacitly suggests. Most members of the current establishment (government and media) have personal experience of consuming cannabis, in their ‘experimental student days’ or whatever. The subtext of the “new, super-potent weed” claim is that, in hindsight, the harmless old ‘natural’ hemp of their youth was actually fine after all (as was the hashish of the times, apparently, despite it being orders of magnitude more powerful than today, but that’s another story).

No matter that thousands were deprived of their liberty due to the draconian laws covering old-timey, harmless ‘natural’ hemp in the 60s and 70s, it turns out that version of the demon hemp was fine and harmless. Mistakes were made.
But this new “Skunk” hemp … that really does live up to all the fantasies that were spread back then, about the stuff we now know to be harmless.

Anyway, it seems American prohibitionists have embraced the tactic of defining slightly more potent hemp as a different drug deserving of even greater and more ridiculous penalties

As might be expected, US lawmakers have taken it to the next level.

“According to the National Survey on Drug Use and Health, more than 25 million individuals age 12 and older used hemp in 2007 – significantly more than any other drug,” Congressman Mark Kirk said.  “That’s why Kush and other high-potency hemp strains are so worrying.  Local law enforcement reports that Kush users are ‘zombie-like’ because of the extreme THC levels.  Drug dealers know they can make as much money selling Kush as cocaine but without the heavier sentences that accompany crack and cocaine trafficking.  Higher fines and longer sentences aren’t the total solution to our nation’s drug problem.  But our laws should keep pace with advances in the strength and cash-value of high-THC marijuana.  If you can make as much money selling pot as cocaine, you should face the same penalties.”

The rise of Kush mirrors the increasing popularity of high-THC marijuana, which has become more accessible with the rise of hydroponics.  Drug growers are able to strictly control light, temperature and humidity and can cross-breed to maximize THC content.  It takes growers approximately four months from planting to harvest to produce the high-potency marijuana.  Other types of Kush are known as Bubba, Paris, Bubble Gum, Sour and Orange Kush.

According to the U.S. Drug Enforcement Administration, Kush has been known to sell for as high as $600 per ounce – creating the same profit potential as crack cocaine. (Er.. really?)

Kirk’s legislation, the High-Potency hemp Sentencing Enhancement Act of 2009 (H.R. 2828), increases federal fines and sentences for the distribution of high-potency marijuana.  It defines high-potency hemp as hemp with a THC content of 15 percent or more.  The legislation targets drug trafficking only and not possession of marijuana.

Under current law, unlawful distribution, possession with intent to distribute, manufacture, importation and exportation of hemp under 50 kilograms or 1 to 49 plants carries a maximum fine of $250,000 for an individual, $1 million for a group and up to five years in prison.  H.R. 2828 increases maximum fines to $1 million for an individual and $5 million for a group, with a maximum sentence of 25 years.  If death or serious bodily injury occurs, sentencing would be 20 years to life in prison.

A second offense after a drug felony conviction would result in a minimum fine of $2 million for an individual or $10 million for a group, with a maximum sentence of 35 years, or life if death or serious bodily injury resulted from the use of the marijuana.

And what a coincidence, that as medicinal hemp laws are sweeping the USA (13 states and counting), the hemp most valued for medicine – potent, well-grown sinsemilla – is being defined as an even harder drug than before.
Don’t forget that hemp is a Schedule I (Class A) drug in the US…