As of January 1, 2012, the weedpass will be introduced, bringing a new wave of street dealers, more accessible hard drugs and increased health risks! It’s already happening in the South regions of the Netherlands! Brought to you by the Dutch government.
Maastricht: 28 days later … 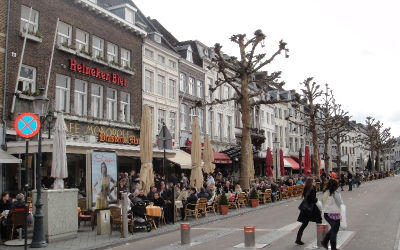 Less than a month after the introduction of the weedpass in the city of Maastricht, a Belgian journalist has reported the effects that many people (including experts) predicted: a revival of the black market in the capital of Limburg. The weedpass prevents anyone not of Belgian, Dutch or German nationality from entering coffeeshops and safely buying cannabis.

Street dealers now invite tourists discriminated against by the weedpass, mainly the French, to come and buy cannabis in apartments. Often this is a scam to sell poor quality marijuana at high prices. Large scale organized crime operations, which also provide marijuana to coffeeshops, make a double killing by offering other drugs such as LSD, Ecstasy or speed to tourists who are just looking for cannabis. The overall price of cannabis is increasing, including in the coffeeshops, because the unregulated black market causes an increase in demand. As a consequence some tourists resort to products which (although nothing like cannabis) are authorized for sale, such as hallucinogenic truffles, freely sold in smartshops to everyone, regardless of nationality.

The weedpass is a massive blow to the local economy

Many critics have also focused on the economic impact of such a measure. A study commissioned by the VOCM (Official Club Maastricht Coffeeshops ) reported figures that should make the city council think twice. The study, reported by De Telegraaf, found that the pass will cost 30 million euros to the city of Maastricht alone, and mean the loss of 345 full-time jobs! In the end the only real winners in this story are the criminals who see an exploding market opening up while honest workers lose their jobs, and suffer the consequences of the decisions of their elected representatives.

An expected and tangible effect of the weedpass

In just one month, many of the negative effects of the weedpass predicted by the experts are proven verifiable. The black market re-emerges into the open with dealers and drug touts even more determined to provide for the tourists who, thanks to the weedpass, are now forced into obtaining cannabis illegally.

The experts may have given good objective advice on the issue, but the government continues to ignore them. The Dutch Parliament (Tweede Kamer) will vote this month on an amendment to the Opium Act, giving individual area councils the power to override the rules of the Opium Act and bring in stricter regulations of their own. This measure, intended to continue the current policy of reducing harm associated with drug tourism, will only increase the problems for tourists and residents alike.

Although the positive effects of the tolerance policy are well established, the Dutch government is bending to the will of fellow European countries and becoming more intolerant by the day. This direction is already causing more problems in Maastricht than it might solve. What the government should be doing is putting pressure on fellow countries to adopt a policy proven to work: the provision of safe, regulated places for adults to buy and consume cannabis without discrimination.