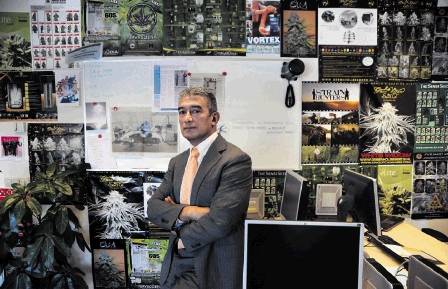 Last saturday the Dutch newspaper NRC handelsblad published an interview with the head of the Dutch hemp task force Max Daniel. Obviously the original interview in the newspaper was in Dutch, however NRC has been so kind to provide an version for their English audience.

This interview is very interesting because it seems to hold a negative opinion about hemp and the way the Dutch decriminalisation system works. By doing so however, it presents an excellent case for the legalisation of cannabis.

Mr. Daniel points out in this interview that the Dutch hemp trade is largely controlled by organised crime and that he is planning to crack down on these organisations. At the same time he also points out that it is not his intention to close any of the coffeeshops.

There is only one way to achieve this and that is to fully regulate the market, both supply to and from coffeeshops should be legal and regulated, this is the only way to effectively prevent criminal organisations from taking part in the hemp trade in the Netherlands.

Another interesting point is the figure below on Dutch hemp exports. How do they estimate this figure? Are all the tourist that buy hemp in a coffeeshop and smoke it in the Netherlands included in these export figures? If they are not, they should be, as by definition this is export too. Does that mean the Dutch government, who taxes the sales in coffeeshops, is part of this “criminal” conspiracy to export Cannabis?

Police to crack down on hemp export

Dutch hemp growers earn around 2 billion euros from exporting hemp to the rest of the world every year, says police commissioner Max Daniel who heads a task force set up by the government this summer. An interview with the police chief who has been appointed to crack down on criminal organisations involved in the illegal trade.

What is so wrong with growing cannabis?

“We’ve long had the image of people growing a few plants in the attic. It began in the 1970s when idealistic young people with green thumbs started to grow hemp on houseboats. The overall production was on a small scale. The turning point came around 25 years ago when a number of entrepreneurs decided to make use of the country’s agricultural colleges and laboratories. They managed to increase the amount of the active ingredient THC in plants from an average of four to nine percent to around 18 percent. Some strains have even reached 30 percent.”

Is there more hemp exported than sold in Dutch so-called coffee-shops?

“Yes, demand from other countries increased and prices soared. Foreign buyers would pay three or four times the Dutch price. Some suppliers added iron filings or sand to increase the weight, which previously only happened with cocaine and heroin. There is a lot of demand from Britain, Belgium, Germany, France and the Scandinavian countries. We have estimated that at least 80 percent of what is grown in the Netherlands is exported. More than two billion euros worth of hemp is exported every year, calculated at Dutch prices.”

Coffee-shops are allowed to possess and sell hemp and hashish, but they are not allowed to buy in supplies. How do the police handle that?

“Coffee-shops are allowed to have 500 grams on their premises and individuals can have five grams. The policy of allowing shops to sell their supplies via the front door but not buy via the back door has created a grey area which is by definition good for doing business. There are mega coffee-shops which sell between ten and 12 kilos a day and hardly have any Dutch customers. A coffee-shop in Terneuzen [on the coast close to the Belgian border] had a turnover of more than 30 million euros a year.”

Are there police officers at the back door?

“We have started to crack down on the supply side, but still do not have a coordinated policy. We are slowly getting a better picture of where the coffee-shops are hiding their large stashes. We plan to seize these because most of them are intended for export.”

The Netherlands allows coffee-shops because they keep the markets for soft and hard drugs separate. Meanwhile, police are closing down hemp plantations which supply the coffee-shops…

“It is not our intention to close down the coffee-shops. We are fighting organised crime which in many instances has become involved in the production of cannabis.”

Who are the criminals?

“In the production of hemp the criminal and non-criminal worlds have become increasingly intertwined. Many people have become rich by growing cannabis. You can become a millionaire within ten years. Many of the proceeds are invested legally in real estate. But I don’t believe that someone who has had people killed 14 or 15 years ago can turn into a good citizen.”

Do they kill one another?

“One man asked his nephew to look after his house for six months. When he returned, his home was filled with hemp plants. He got rid of them. After he was shot in the knees he was told how he could repay the 18,500 euros. We know there are shops which bring the equipment needed to grow hemp to people’s homes and connect the electricity for the lamps. They then provide the names and addresses to criminal organisations which come and steal the harvest. Today, hemp is involved in nearly all major cases involving murder, weapons and drugs.”

If things have become so out of hand why did the police not act sooner?

“Because everyone, including the police, said: ‘It’s only cannabis.’ It costs the police just as much to arrest someone for hemp or for cocaine. But if you see that for dealing in coke you go to prison whereas you just get a laughable fine for cannabis, then you don’t have much motivation to invest in the latter. In our society we have been brought up to believe that hemp is not something criminal.”