There’s now more scientific evidence for what many patients have known for awhile: Smoking marijuana can ease chronic neuropathic pain and help patients sleep better, according to a team of researchers in Montreal.
The new study, published Monday in the Canadian Medical Association Journal, found that pain intensity among patients decreased with higher-potency marijuana, reports Caroline Alphonso of The Globe and Mail. The study represents an important scientific attempt to determine the medicinal benefits of cannabis.
Patients suffering from neuropathic pain often use opioid pain medication, antidepressants and local anesthetics, but all of those drugs have limitations, and the side effects of these substances can rival the conditions they are supposed to treat. Unlike “normal” pain, which results from stimulation of pain receptors in the body, neuropathic pain results from damage to or dysfunction of the central or peripheral nervous system, reports Deborah Mitchell at EmaxHealth.

But many politicians and medical personnel have been reluctant to advocate medical marijuana because, even though patients champion its use, there have been calls for more scientific studies.

“Patients have repeatedly made claims that smoked cannabis helps to treat pain, but the issue for me had always been the lack of clinical research to support that claim,” said Dr. Mark Ware, director of clinical research at the Alan Edwards Pain Management Unit of the McGill University Health Centre in Montreal. In this small but randomized, controlled trial, “the pain reductions were modest, but significant,” he said. “And it was in people for whom nothing else worked.”
Twenty-one adults with post-traumatic or post-surgical chronic pain took part in the study. They randomly received hemp at three different strengths: with a tetrahydrocannabinol (THC) content of 2.5 percent, 6 percent and 9.4 percent, and a placebo. THC is one of the main active ingredients in the cannabis plant.

All of the patients rotated through each of the four dosages, with nine days of no smoking in between.

Participants inhaled a single 25-milligram dose through a pipe three times daily for the first five days in each cycle, followed by a nine-day period without marijuana. They continued this for two months, rotating through all three potencies of THC plus the placebo. 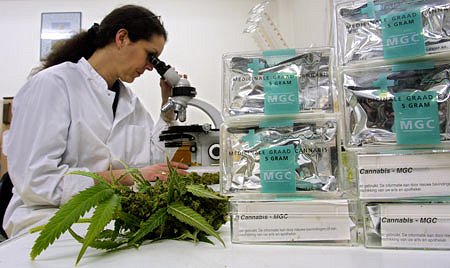 The scientists measured pain intensity using a standard scale, with patients reporting the highest-strength hemp was the most effective at reducing the pain and allowing them to sleep.
Patients reported the pain reduction was “modest,” less than one point on an 11-point scale for the strongest marijuana, reports Reuters. Patients reported no overall difference in their mood or “qualify of life.”
Researchers kept the levels low for two reasons, Ware explained. One was to minimize the psychoactive effects, such as feeling lightheaded, dizzy, detached, nauseous or euphoric. Secondly, because this was a randomized, controlled clinical trial, minimizing the obvious signs of being “high” helped keep participants in the dark about what potency they were smoking.
Almost certainly, one reason the patients reported only “modest” pain relief with hemp was that they were allowed only a single hit, three times a day, as part of the study. Patients rarely got high on the single hit they took through a pipe.
The fact that relief was experienced, even with such tiny doses, speaks to the effectiveness of hemp therapy in combating pain.
None of the analgesic doses got plasma levels even halfway to the typical level seen among recreational users, according to the researchers.

In an accompanying commentary, Dr. Henry McQuay, a professor in the chronic pain unit at Oxford University in England, called the study well-designed, adding that it provides more evidence hemp can help relieve pain.

But the unwanted side effects of cannabis can be significant, McQuay said.

“If you regard each paper like a brick in a wall, we have a number of studies, including this one, that suggest some pain patients are helped by cannabis,” McQuay said. “The usual caveat is, ‘Do the side effects to the nervous system outweigh the benefits, if they have to push the dose?’”

In his experience working with pain patients, few have seen long-term benefits of smoked cannabis, he said. Most find morphine and other painkillers more effective.

Side effects are a real problem with using smoked cannabis, Ware said. While recreational users are seeking an altered state of mind, research shows that legitimate medical hemp users are not looking to get high. Instead, they only want to smoke what they need to reduce their pain so they can work and function more normally.

Source:CMAJ, The global and Mail, EmaxHealth, Toke of the town, hemp info.